Bezier curves are commonly used in the computer graphics world, but there is no reason they can't be adapted for audio waveforms too. In regards to the name of the application, I thought the German word for sound (Klang) was perfect for describing the type of stuff this synth is good at producing (clangorous percussion, industrial noises, bell-like tones, unusual basses etc), and the 'Quad' because each of the X and Y co-ordinate sliders of the two points that warp the waveform along the x and y axes, can be modulated independently.

So unlike FM which only allows one modulation frequency to a waveform at once, the Bezier Curve synthesis technique allows four separate modulation frequencies to be applied simultaneously. This of course makes for a distinct sound production capability. 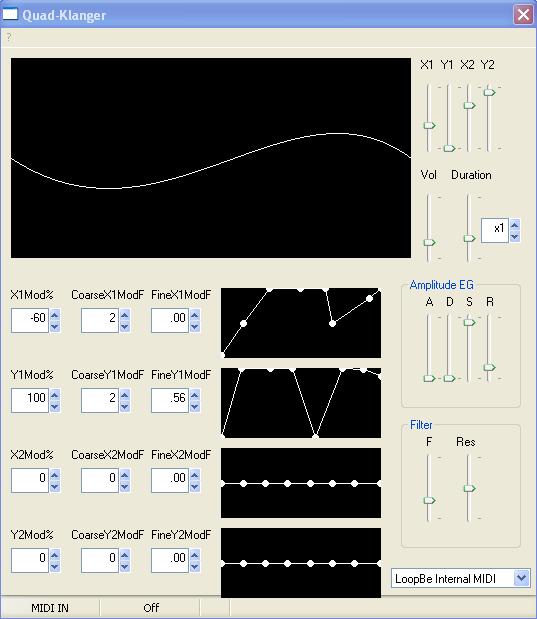 LISTEN TO QUAD-KLANGER
MORE QUAD-KLANGER SOUNDS
Here's a picture I took when toggling between a virtual MIDI keyboard and a little M-Audio Oxygen 8 MIDI controller (in lower right of photo), to play Quad-Klanger. The virtual keyboard is 'connected' to Quad-Klanger via a virtual MIDI port (which shows up as a selectable MIDI device in the application), and the hardware controller is connected via USB (which also appears as a selectable device option in the application): 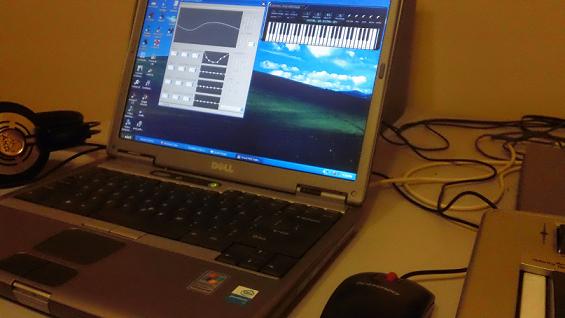 Download File
Simply unzip the contents of this file into any directory on your hard drive, and double-click on 'Quad-Klanger105.exe' to launch the application.

Minimum Hardware: Intel Pentium 2, 500MHz. 512MB RAM
Operating System: Windows 2000, XP, 7. I have successfully installed and run the application on these platforms, but should also work with Windows Vista.