Yes indeed, what we have here is another 'off-the-wall' way to synthesize sounds. Like so:

a) Generate a standard sine wave that swings in the range [-1,1]
b) Convert each sample value of the sine wave to an integer that can be represented on the bits of one byte
c) Perform conditional and unconditional operations on the bits like shift them, re-arrange them, flip them and so on
d) Convert the 8 bit pattern back to a sample value, and output the waveform

My objective was firstly to see what kind of complex wave shapes could be created like this, and secondly, to discover whether the method is capable of introducing movement to the waveforms it generates, in some intuitive way. A link to the sounds is in the 'Results' section. 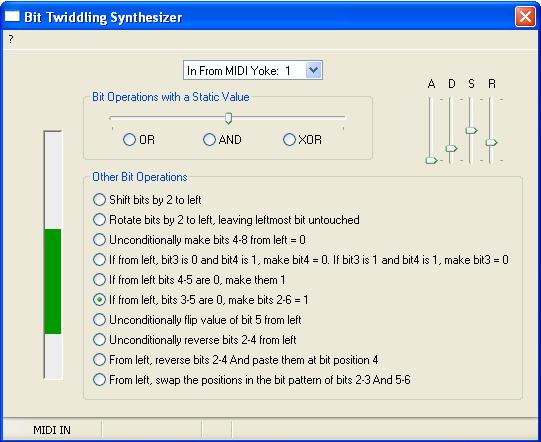 When I first considered the possibilities of BTS, a fellow synthesis enthusiast remarked 'But there's only so much you can do with 8 bits', and that's when I took up the challenge to see not only how many different waveforms I could produce with operations on 'just 8 bits', but determine whether any kind of dynamic variation to the sound was possible with BTS. After all, no matter how many harmonics a generated waveform may be jam-packed with, if you can't evolve the sound as it plays with the synthesis technique in question, interest in both the sound and the synthesis method is bound to wane quickly. Quite simply, movement is an essential aspect of sound design. When a piano key is struck for example, we expect sound motion throughout the length of the note; the initial sound is very 'bright' and becomes 'duller' as it dies away (a traditional subtractive synth simulating a piano sound would achieve this effect through the use of a filter). With this in mind, I roughly assembled an application for experimenting with BTS in PureBasic. Then, based on initial results obtained through the trial and error of various bit operations, I 'formalized' the architecture and GUI of the application, played it with a virtual midi keyboard, and have captured its outputs for presentation and discussion.
*SPOILER ALERT* The sonic and visual contrast between a humble sine wave and the results after 'twiddling its bits', is like the difference between where I'm standing and what's on either side of me: 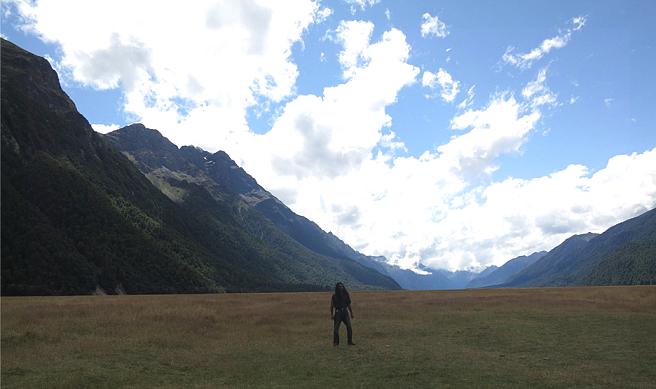 Download File
Simply unzip the contents of this file into any directory on your hard drive, and double-click on 'BitTwiddlingSynth101.exe' to launch the application. The zip also contains the application source in a .txt file, and the .PB PureBasic (v4.6) project files.

Minimum Hardware: Intel Pentium 2, 500MHz. 512MB RAM
Operating System: Windows 2000, XP, 7. I have successfully installed and run the application on these platforms, but should also work with Windows Vista.

A traditional 'subtractive synth' can be thought to consist of:

The sound source typically produces simple waveshapes such as sawtooth and pulse which are easy to describe mathematically and generate electronically, and which contain all the required harmonic content for the final sound. The modifier comprises at least a filter to 'subtract' any harmonics that aren't required, and an amplifier to shape the sound's volume, and both of these are generally controlled by Envelope Generators - such as ADSRs.

Some subtractive synths feature a single ADSR which controls both the opening and closing of the filter, and the volume of the sound over time. I constructed the BTS test application also with one ADSR, and although it too determines the final level of the sound (the overall amplitude of the signal after bit manipulation is performed), that's where the similarity with a traditional subtractive synth ends. The BTS test application has no filter, as the intent was to see whether timbral variation in the sound could result from a change in signal level PRIOR to the bit manipulation. Furthermore the BTS application features only one simple sound source - a sine wave - as the intent was for operations on the bits of the sine wave to produce a diversity of waveforms.

In the following schematic of the BTS application, the blue lines depict the ADSR affecting the amplitude of the signal before and after the bit manipulation (in the before case, the upper and lower amplitude limits within which the ADSR operates are set by means of a 'Control Limits' slider, and in the after case, the ADSR operates between the maximum amplitude 1 and minimum amplitude 0). The red lines show the 'core' BTS signal path. The Static Value slider sets a value between 1 and 100 for use by three of the thirteen types of bit manipulation operations that were tried (the remaining operations did not use this facility):

The following 'bit twiddles' were tried, and are available as choices via the BTS application GUI:

The asterisked operations in this list were implemented using binary arithmetic commands native to the programming language (PureBasic), without first converting the bit pattern into a string and doing the manipulations as sub-strings. For example, let us say the value of each sample of the sine wave is held in variable osc1val.f Then:

To shift two bits to the left:

To unconditionally flip fifth bit from the left:

An example of a non-asterisked operation (where the bit manipulations were performed as strings), is 'Reverse the three bits two to four from left', as follows::

In all such string-based bit manipulation cases, it was found the waveform could be made to change substantially if:

The PureBasic constant #PB_Byte is omitted when converting the bit pattern to a string prior to the bit manipulation (#PB_Byte specifies that the number to be converted into a string is a byte number ranging from 0 to 255, and not a quad number)
and/or
The variable holding the value of the bit pattern after bit manipulation is performed, is NOT explicitly cast as a byte type (which can take a value in the range -128 to +127) ie if in the example above the expression is written as reassembledval = Val(reassembled), instead of reassembledval.b = Val(reassembled)

As can be seen from below waveforms, such modifications when applied to the 'Reverse the three bits two to four from left' example, allow 'gapped/rectified' waveforms and waves with 'alternating shapes' (different shapes concatenated in sequence) to be created:
The application GUI does not expose the ability to include or exclude #PB_Byte or to include or exclude the '.b' suffix (from the variable holding the value of the bit pattern after bit manipulation is performed), but the source code is commented with where this can be done directly.

LISTEN TO BIT TWIDDLING SYNTHESIZER SOUNDS
The ADSR was set to a short Attack, and for each waveform generated with each BTS operation, the wave shape at the top of the Attack, and close to the end of the Release, was captured. The snapshots are all shown below. Key observations:

i) In each case, the primary visual difference between the two sets of 'From' and 'To' images is that certain segments are accentuated while others are suppressed, even though the 'basic form' of the waveform is retained. Such a change in shape is sufficient for a timbral difference between the waveform instances to be perceived - not unexpected, since it is possible for even minor changes to a wave shape to produce large changes in the harmonic content.

ii) A common feature of the generated waveforms is that they bristle with sharp edges, which means they are not band-limited and so not aliasing-free. This complexity however does result in their being sonically rich (since the sharper the changes in amplitude over time, the richer the sound tends to be). It is not only this richness which makes them good source material for a subtractive synth, but also the fact that it is unnecessary to mix together a great many 'standard waveform' oscillators to create these waveforms in the first place (since BTS generates them easily).

iii) For most bit operations, varying the position of the 'from' control limit results in a change in the initial shape of the waveform. The extent of the change varies according to the bit operation in question.

We've shown that performing various bit operations on a sine wave allow a wide variety of harmonically rich wave shapes to be created, making them a good source of sound for subtractive synthesis. In fact graphically, the set can almost pass as a 'digital art' collection, featuring waveforms with compound sawtooth, triangular, rectangular and curved segments. Dynamically changing the amplitude of the sine wave prior to performing the bit operations both alters the waveform shape by accentuating certain segments and suppressing others, and changes the sound without any perceived 'discontinuities', as long as the range of amplitude change is constrained to certain bounds in each case.